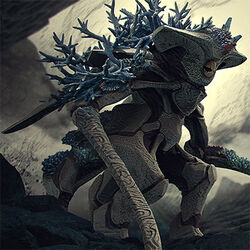 The Bhagaba are a species of sentient coral from the Endless Universe.

The Bhagaba are not individualistic race but act as a uniform body. They are actually small components of a natural planet-sized "supercomputer" made from rock and coral.

According to some races the Bhagaba are akin to puppets of a vast, alien mind with no will of their own making it unclear if they are alive. The Bhagaba are pacifists and curious of other races.

Retrieved from "https://aliens.fandom.com/wiki/Bhagaba?oldid=172581"
Community content is available under CC-BY-SA unless otherwise noted.