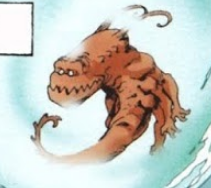 Bhadoüa are aquatics resembling a cross between a six-armed salamander and a eel.

They are a spacefaring species one of their members Prince Ladhal being a member of the Thirteen. The Bhadoüa are reputed for their honor and honesty.

Retrieved from "https://aliens.fandom.com/wiki/Bhadoüa?oldid=160426"
Community content is available under CC-BY-SA unless otherwise noted.