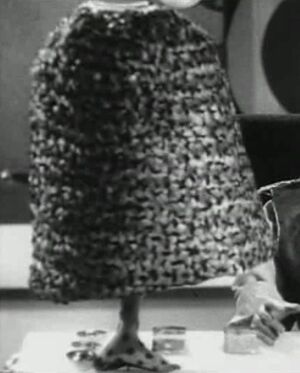 This sapient species is native to the Betelgeuse System and looks like a large bell-shaped fungus. They also have a retractable antenna which can be extended for several meters. By touching other creatures with the luminous tip of their antenna they are able to relieve pain, cure fatigue and transfer their life energy to other creatures, with the donor becoming shriveled and weak as a result.

Betelgeusians are capable of instinctively learning new languages after hearing them for some hours. Their technology is based on substances unknown to Humans and their ships are capable of FTL speed. They seem to survive just as well in both Earth and Jovian atmosphere.

Retrieved from "https://aliens.fandom.com/wiki/Betelgeusian_(Space_Patrol)?oldid=173768"
Community content is available under CC-BY-SA unless otherwise noted.