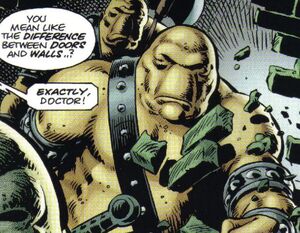 Doctor Who
The Bestiarus, a.k.a. Beast Men are biologically-engineered organic humanoid soldiers with superhuman strength but very limited intelligence, capable of doing little more than obeying orders. They're also completely immune to pain.

They were created in an alternate timeline in which the Roman Empire never fell and became a hostile interstellar nation secretly ruled by the Malevilus.

Retrieved from "https://aliens.fandom.com/wiki/Bestiarus?oldid=163500"
Community content is available under CC-BY-SA unless otherwise noted.