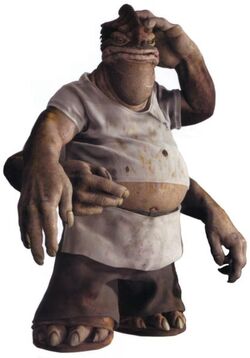 Besalisks - also known as Ojom - are a species of multi-limbed, sapient organisms indigenous to the cold ocean world of Ojom. Evolved from large, flightless avianoids, they are often mistaken for being reptilianoid in nature.

Male Besalisks have prominent crests and four arms; this crest was likely used during courtship rituals, at least back before sapience in the species. Females of the species can have as many as eight arms, perhaps evolved for caring for young or some other task befitting females of their species. The existence of these appendages requires a hearty metabolism, and so Besalisks are adapted to store food and water for many days, and should the need arise, they can survive for long periods without either. Scruffy sensory whiskers line the area below their noses, just above the robust wattle most adult Besalisks possess.

Being a quick-witted and sociable species by nature, Besalisks easily integrate into any civilized society, though few Besalisk colonies exist outside of sparsely-populated Ojom. Besalisks also have never sought representation in the Galactic Republic as they have been content to go about their business while politicians and bureaucrats run the galaxy. During the rule of the Galactic Empire, their species narrowly avoided enslavement by calling in favors with various influential underworld connections, although not without cost - many Besalisks ended up spending many years working off the debt, especially those who had been foolish or desperate enough to seek aid from the notorious Hutts.

Retrieved from "https://aliens.fandom.com/wiki/Besalisk?oldid=184460"
Community content is available under CC-BY-SA unless otherwise noted.