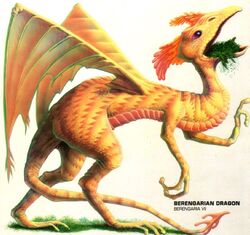 Star Trek
Berengarian Dragons are a fire-breathing species of flying reptilian creatures from the planet Berengaria VII. Some members of this species can reach over 200 meters in length.

They were discovered by a Vulcan science vessel in the early years of the 22nd century.