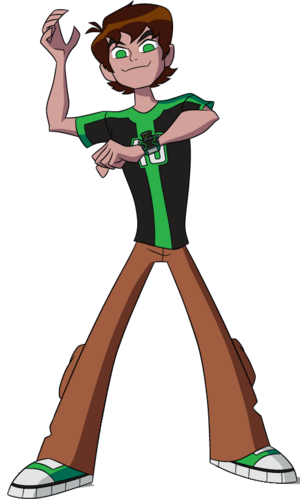 Benjamin Kirby "Ben" Tennyson is a Human, cousin of Gwen Tennyson, and the grandson of veteran Plumber Max Tennyson and the Anodite Verdona.

Ben's physical appearance has changed from a 10 year old to a 16 year old. However, he retains brown hair, green eyes, pale skin, and is quite skinny for his age, though he shows a lot of muscle definition due to being athletic.

At the age of 10, he came in possession of the Omnitrix, a watch-like alien device containing genetic material from numerous different species, which allows him to temporarily transform into a number of alien forms. During this time he battled foes such as an Osmosian named Kevin Levin and the Chimera Sui Generis known as Vilgax.

About a year later, Ben became obsessed with a Conductoid named Feedback, though the form was destroyed by a mutant Galvanic Mechamorph named Malware. Sometime later, he took off the Omnitrix for an unknown reason.

Less than four years, Ben put back on the Omnitrix, which recalibrated and assumed a new form. However, he was forced to destroy the Omnitrix to prevent Vilgax from weaponizing it and obtained the Ultimatrix, an Omnitrix-type device with the ability to evolve his aliens into more powerful forms.

By age 16, Ben became world-famous and was given a second Omnitrix after Azmuth deemed him worthy of it; the one he had used prior was revealed to be a prototype.