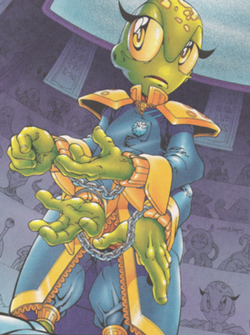 Karl Bollers
The Bem are a race of all-female alien scientists from the world of Argentium, which, unlike most planets, is shaped like a wheel or ring.

As a race, they pursue scientific knowledge, and are not above interfering with the affairs of other species. Their government is called the Argentium High Command.

Retrieved from "https://aliens.fandom.com/wiki/Bem?oldid=169421"
Community content is available under CC-BY-SA unless otherwise noted.