Being of Unimaginable Light 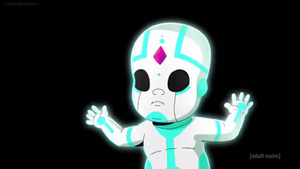 Olan Rogers
The Beings of Unimaginable Light is the tentative name of a race of mysterious beings that created the Arachnitects who then created the Titans.

The beings were vaguely humanoid, dynamically shifting their forms.

The Beings existed for untold eons, creating the Arachnitects. They instructed their creations to create the Titans and build the layers of dimensions of the universe. Thus they were indirectly responsible for the creation of existence.

Retrieved from "https://aliens.fandom.com/wiki/Being_of_Unimaginable_Light?oldid=155417"
Community content is available under CC-BY-SA unless otherwise noted.