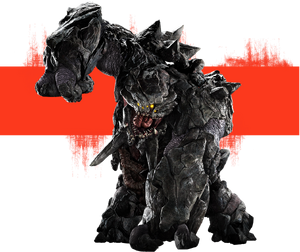 Behemoth is one of the largest, and most durable monster on Shear. He, much like Goliath, Wraith, and Kraken, had escaped from his constraints, and became one of the top predators.

Behemoth is almost Golem-like in appearance, most of his body covered in stone-like armored plates, mostly for defense. He has three sets of small eyes on his head, the main pair surrounded by two smaller pairs of yellow eyes. Behemoth has a gorilla-like body structure, moving on all fours, with his forelegs larger than the back legs. He also has rocky spikes protruding from his back, and a pair of tusks measuring almost ten feet long each. The plates on him can easily be mistaken for rocks, or other mineral-like materials. He also has a very long, harpoon-like tongue, much like a chameleon, to capture and pull in prey.

Behemoth is a being of the earth, most abilities relating to the ground he walks on. He is able to spit out large lava rocks to cover an area of molting magma. He can also shape the earth around him - able to either create rock walls to block off paths, or make fissures to open the earth, and attack other creatures.

Retrieved from "https://aliens.fandom.com/wiki/Behemoth_(Evolve)?oldid=171480"
Community content is available under CC-BY-SA unless otherwise noted.