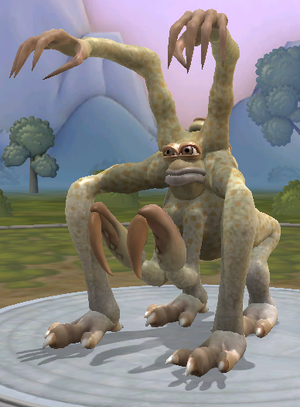 The Beeoh is a quadrupedal creature that can be found in the SPORE Universe.

Beeoh have a numerous amount of limbs, giving to four sets total. Two of the limb sets are used for locomotion, ending in three-toed, elongated feet. One set of limbs are used for manipulation with human-like hands ending in pointed fingers. Another pair of limbs comes out of its chest, ending in mandibles like that of a mantis.

Retrieved from "https://aliens.fandom.com/wiki/Beeoh?oldid=145058"
Community content is available under CC-BY-SA unless otherwise noted.