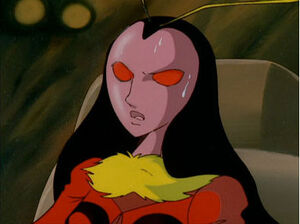 Purple for Queens and dark green for workers.

Star Blazers
The Bee People are an insectoid race which inhabits their homeworld of Beeland, a tropical world, living in massive beehive like cities. The majority of the species has dark green skin, though their Queens have pink to purple skin. They are a relatively primitive species, although they were given advanced technology by the Gamilons.

At an unknown point before the year 2199 the Bee People were discovered by the Gamilons. Usually such an unimportant species would have been ignored or destroyed, however the Bee People produced one important product. Their Royal Bee Jelly is considered a rare delicacy and they were allowed to live in exchange for exporting it to the Gamilon Empire.

During the Earth Space Battleship Argo's journey to Iscandar in 2199 they entered the Beeland System and a recon shuttle went down over the planet. Discovering the Bee People were in the midst of a civil war over the Gamilon occupation, the crew of the shuttle are mistaken for Gamilons and imprisoned by the rebels.

During a battle between the Queen's forces and the rebels, a rescue party from the Argo came down and rescued the captured crew, destroying a Gamilon tanker ship in the process. The Earth forces retreated from Beeland before the end of the battle and the outcome of the civil war is unknown.

Contact with the Bee People was made again in 2225 after the Argo investigated a series of attacks on Earth's colonies. No ship had previously been able to intercept the unknown attackers but a daring maneuver by the Argo disabled one of the vessels. Boarding the ship, which turned out to be an old Gamilon tanker, the boarding party discovered the corpses of numerous Bee People. While the reason why they were attacking Earth colonies is unknown, it appears that they were desperately fleeing an artificial black hole that was headed for the Sol System.

Retrieved from "https://aliens.fandom.com/wiki/Bee_People?oldid=101780"
Community content is available under CC-BY-SA unless otherwise noted.