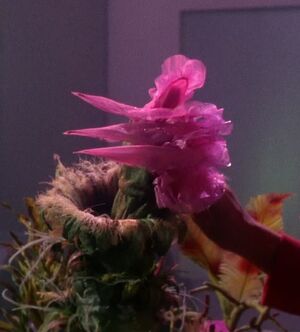 Beauregard is a flower-like creature, sessile but highly mobile; kept as a pet by Yeoman Janice on the starship Enterprise in the 23rd century.

The creature's body is of greenish coloration and can be retracted into a broader tubular structure, similar to marine polychaetes on Earth. Its mouth is surrounded by pink petal-like structures. Despite its plant-like appearance, Beauregard behaves more like an animal and emits many sounds: purring in the presence of those that care for it and shivering with fear when in the presence of a Salt Vampire, even though the Vampire was camouflaged to look human.

Lieutenant Sulu opposed to the name Beauregard and suggested that Gertrude was more appropriate, implying that the creature is female.

Retrieved from "https://aliens.fandom.com/wiki/Beauregard_(Star_Trek)?oldid=105027"
Community content is available under CC-BY-SA unless otherwise noted.