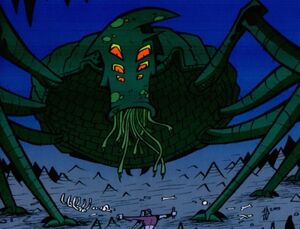 The Beast in the Mouth of the Mountain was an immense, cave-dwelling arachnoid apparently indigenous to the forest moon of Endor. Likely an entire, albeit perhaps rare, species as opposed to a solitary member, the only known Beast was discovered in 19 BBY. This monstrosity destroyed a number of B1 Battle Droids as well as Clone Troopers before finally succumbing when the Jedi Guardian Aayla Secura caused the cavern's stalactites to collapse onto it, likely crushing its chitinous exoskeleton. It was this event that cause Aayla to be worshiped by the local Ewoks.

While most likely its own species, it may in fact be an unidentified gender, caste, or even metamorphose variation of the Arachne or the Rearing Spider, or even another still unseen arachnoid. In all likelihood, however, it at least shares a common ancestry with the Rearing Spiders. As eluded to earlier, there is a chance that it also could potentially be a unique organism, having resulted from accidental or purposeful mutation of a Rearing Spider or similar arachoid. At the same time, it may have actually been a survivor of some long-forgotten shipwreck.

Retrieved from "https://aliens.fandom.com/wiki/Beast_in_the_Mouth_of_the_Mountain?oldid=171063"
Community content is available under CC-BY-SA unless otherwise noted.