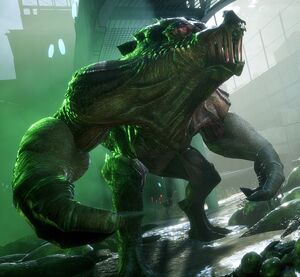 The Beast as it has become known is one of the Aliens that appeared on Earth in 2031 after a Meteor Strike devastated the planet in the Earthfall Universe.

Retrieved from "https://aliens.fandom.com/wiki/Beast_(Earthfall)?oldid=170626"
Community content is available under CC-BY-SA unless otherwise noted.