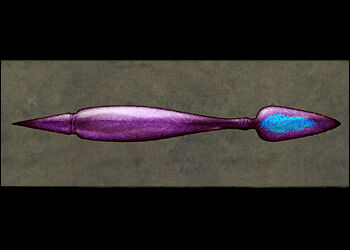 Expedition
Beach Quills are spike-like, ambush predators with a short ranged attack, indigenous to the planet Darwin IV. They are also some of the smallest creatures to be found on the planet. They live in huge colonies within the littoral zone which can be up to a million strong, where they lie in wait for an organism to step near.

Once one inevitably does, they will launch themselves into the hide of their prey by the hundreds, propelling themselves with enormous velocity over short distances by means of a folded, muscular 'foot' which snaps the animal through the concealing undergrowth their colonies camouflage themselves in. At this point, they will inject their prey with neurotoxins, stunning the victim so that the Quills may burrow into its flesh, only to later emerge and rebury itself. Their colonies are so potent that despite being so small in comparison to other species on the world, they can bring down even the greatest beings, such as the Groveback, often causing them to suffer a slow and painful death.

Retrieved from "https://aliens.fandom.com/wiki/Beach_Quill?oldid=180057"
Community content is available under CC-BY-SA unless otherwise noted.