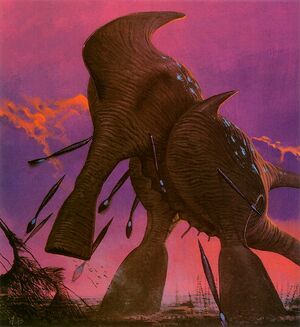 Wayne Barlowe
Beach Lopers are a bipedal organisms indigenous to Darwin IV, and are a distant peripheral cousin to the immense Emperor Sea Strider. Their facial trunk has been stated as being vaguely reminiscent to that of the elephant on Earth. They have light blue biolights on their back. They generally frequent around the beach of the Amoebic Sea, using their trunk to catch and eat small flyers and floaters, such as Sea Strider larvae.
Community content is available under CC-BY-SA unless otherwise noted.
Advertisement