Batreaux is a demon. He has appeared in The Legend of Zelda: Skyward Sword. He wishes to be a human again because he had been a demon for years and years. If that then he becomes a human again. When Link helps him fulfill his wish by bringing in the Gratitude Crystals where that hero collects throughout his adventure during the game, He will give Link some upgrades as rewards.

He can avoid things by flying with his wings. He can only fly for 3 hours outside until his energy runs out. He is a good alien in Zelda series. 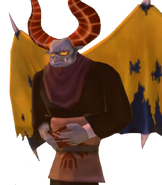 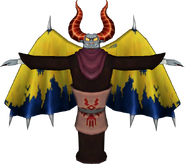 The concept art of Batreaux.
Add a photo to this gallery
Retrieved from "https://aliens.fandom.com/wiki/Batreaux?oldid=58659"
Community content is available under CC-BY-SA unless otherwise noted.