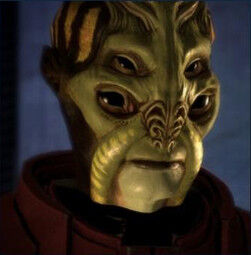 Mass Effect
A race of four-eyed bipeds native to the world of Khar'shan, the batarians are a disreputable species that chose to isolate itself from the rest of the galaxy. The Terminus Systems are infested with batarian pirate gangs and slaving rings, fueling the stereotype of the batarian thug. It should be noted that these criminals do not represent average citizens, who are forbidden to leave batarian space by their omnipresent and paranoid government.

Despite several disagreements with the Citadel and simmering hostility toward humans, most batarians prefer profitable pursuits such as drug running and slave grabs to out-and-out warfare. They have a reputation for being shrewd businessmen and merchants, though in more lawless regions of the galaxy like Omega, negotiations with a batarian are likely to be conducted at gunpoint.

Batarians are anthropoidal race, like humans, asari, and others. Their most distinctive physical feature is their four eyes. The batarians are the only organic race in the galaxy to have developed more than a single pair of eyes, except for the yahg, who have four pairs and the Protheans. Batarians also exhibit different skin tone colors: while most encountered batarians are a dark, brown-red hue with pale facial ridges, at least one, Balak, has a black and yellow striped pigmentation with light green facial ridges.

The Citadel Council made first contact with the batarians in approximately 200 BCE, and granted the batarians an embassy on the Citadel a century later. Despite being welcomed into the galactic community, batarian aggression provoked several crises in galactic relations over the years. Sometime around 1785 CE, a batarian fleet bombarded the salarian colony world of Mannovai; in 1913, the Batarian Hegemony annexed the independent asari colony of Esan; and in 2115, Citadel forces skirmished with batarian forces on the planet Enael.

In the early 2160s, humans began to colonize the Skyllian Verge, a region the batarians were already actively settling. The batarians asked the Citadel Council to intervene and declare the Verge an area of "batarian interest". When the Council refused, the batarians closed their Citadel embassy and severed diplomatic and economic relations, becoming an inward-looking rogue state. Money and weapons funneled from the batarian government to criminal organizations led to many brutal raids on human colonies in the Verge, culminating in the Skyllian Blitz of 2176, an attack on the human capital of Elysium by batarian-funded pirates and slavers. In 2178, the Alliance retaliated with a crushing assault on the moon of Torfan, long used as a staging base by batarian-backed criminals. In the aftermath, the batarians retreated into their own systems, and are now rarely seen in Citadel space.

Batarians also play an integral role in Mass Effect Galaxy as the main antagonists. As the batarian ambassador Jath'Amon attempts to negotiate a peace treaty between the batarians and the Citadel, batarian terrorists try to stop the meeting by exposing the Citadel to a biological weapon. Fortunately for the Council, the terrorists, secretly led by Jath'Amon himself, are defeated by Jacob Taylor before having a chance to use the weapon.

Batarians place an extremely high value on social caste and appearance, and overstepping one's place is frowned upon. Casting aspersions on the monetary worth of a social better is considered a serious insult. Batarians strongly believe that species with less than four eyes are less intelligent; they often gain the upper hand in inter-species arguments because other races find it difficult to know which eyes to focus on when speaking to them. Slavery is an integral part of the batarian caste system, despite being illegal according to Council law, and it is currently unknown how the batarians maintained standing on the Citadel for so long with slavery still actively practiced. The custom is so deeply ingrained in batarian culture that batarians consider the Council's anti-slavery standing to be prejudicial, although this may be a bid to harass human colonies un-opposed. Rogue batarian slave rings are feared throughout the galaxy, especially among colonists.

Body language is an important part of batarian society. For example, tilting one's head to the left is a sign of admiration and respect. When a batarian tilts his head to the right it is a sign that he is (or considers himself to be) superior to the one that the gesture was directed at. Therefore, this gesture can also be interpreted as an insult.

Little is known about batarian religious beliefs. Mordin Solus has noted that batarians do believe in an afterlife. When a batarian dies, his soul leaves the body through the eyes. Treatment of the corpse is considered unimportant, unless the batarian's eyes have been removed by an enemy.

The rest of the galaxy views the batarians as an ignorable problem. Their government, known as the Batarian Hegemony, is still hostile to the Systems Alliance, but beneath the notice of the powerful Council races. It is not known what the average batarian thinks about their enforced isolation, as the Department of Information Control ensures that only government-approved news enters or leaves batarian space. Given the batarian government's oppressive nature, it is speculated their supreme leadership is autocratic or totalitarian in nature. The batarians blame humanity for their troubles and claim they were forced to fend for themselves, despite the fact that their exile is largely self-imposed.

However, the batarians still provide up-to-date glossaries and linguistic rules to the rest of the galaxy (allegedly so they can continue distributing propaganda). Possibly due to the prevalence of batarian criminal gangs, batarian languages have become "lingua franca" in the Terminus Systems.

Little is known about the batarian military other than the fact it is largely nationalized; most batarian military hardware is produced by an institution called Batarian State Arms. The batarian fleet is known to operate at least one dreadnought (as a non-Citadel race, they are not bound by the Treaty of Farixen and may have more). They also field smaller vessels, including the Hensa class of cruisers. However, given one member of this class -- later obtained by the quarians and refurbished as the Idenna -- was twenty years old in 2183, the batarians may have retired the Hensa class from active service by this time.

Their military capacity is believed to be weaker than the Systems Alliance as early as 2160 (when colonisation of the Skyllian Verge began) as Balak claims that the council and batarians themselves knew the humans were stronger but nothing was done to protect them, and they were left to defend themselves.

The batarian military has a special forces division known as the Special Intervention Unit. All that is known about the SIU is that their training program is brutal. The Blue Suns hired a group of former SIU operatives to run a hostile environment training camp on the planet Xetic, an investigation by Illium authorities into the camp found that the mortality rate was as high as 18%. But an independent Blue Suns inquiry found that the batarian operatives harsh training techniques were consistent with those employed in the SIU training program.

Retrieved from "https://aliens.fandom.com/wiki/Batarian?oldid=182749"
Community content is available under CC-BY-SA unless otherwise noted.