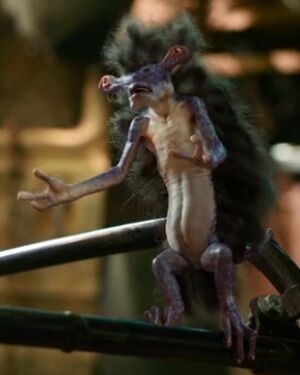 Bassam is an alien merchant of unidentified species who lives secretly on Earth, operating in Marrakesh along with his associate Nasr. It's not known whether Nasr is an alien as well, but Bassam - being much a much smaller creature with long hair growing on his back - habitually clings to Nasr's face to disguise himself as a beard and hide his presence from unsuspecting humans. His clients include the famous alien arms dealer Riza Stavros.

Retrieved from "https://aliens.fandom.com/wiki/Bassam?oldid=180372"
Community content is available under CC-BY-SA unless otherwise noted.