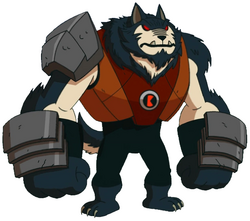 Ben 10
Bashmouth's Species is an unnamed husky-like species from an unknown planet in the Milky Way Galaxy.

This species is carnivorous, as they like eating meat.

This species can generate scaled armor plating from their forearms, which are dense enough to harm a Tetramand.

This species has sharp teeth, which they can coat with metal. In their metal state, they can crunch through concrete. Even without the coating, their teeth is still capable of discomforting a Vaxasaurian when biting their tails.

This species is strong and agile enough to easily handle Tetramands, Vaxasaurians, and Appoplexians in direct hand-to-hand combat.

This species possesses a powerful roar, which is strong enough to demolish a building, send a Vaxasaurian flying into a wall, and launch Ekoplektoids over a relatively moderate distance.

This species possesses enhanced dexterity and quadrupedalism, as they can run on all fours like an ordinary husky.

This species appears to share similarities with the Appoplexians, in which their instincts can take over. For example, the carnivorous aspect of their husky physiology will make them divert their attention to meat. Similarly, they can be distracted with sticks, like an ordinary Earth dog.

The species' teeth does not appear to be strong enough to break an Appoplexian's wrist claws.

Despite the durability of their forearm plating, this species can be harmed by an Ekoplektoid's durability if a member of the latter species duplicates enough times.

Retrieved from "https://aliens.fandom.com/wiki/Bashmouth%27s_Species?oldid=194451"
Community content is available under CC-BY-SA unless otherwise noted.