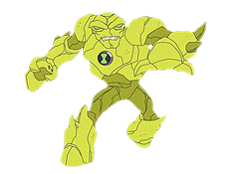 Ben 10
Basalt are a rock golem species from the planet Andesite.

Andesite may be a dangerous place for Humans, but Basalt are very skilled at adapting to their environment.

Basalt possess superhuman strength, which is good for crushing and pummeling objects.

Basalt possess terrakinesis, being able to generate and manipulate earthquakes.

Basalt are cumbersome and are neither very fast nor agile.

Water is dangerous to Basalt, as it will gradually erode and weaken their body. Additionally, Basalt cannot swim and will sink like a stone.

Retrieved from "https://aliens.fandom.com/wiki/Basalt?oldid=193050"
Community content is available under CC-BY-SA unless otherwise noted.