Bas are a species that work for the PTO. Guldo is the most high-ranking member as he is a member of the Ginyu Force. Guldo is a mutant Bas and the strongest member from their home planet.

Guldo's race have the distinct ability to be able to stop time for as long as they can hold their breath. The species also has telekinetic abilities. Guldo was also able to survive as just a head and even sweat and gasp when Vegeta was about to blast him, though it is unknown how long they can survive without their body.

Guldo, the most notable member 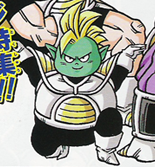 Kuruzo, despite having 2 eyes & hair, is Guldo's counterpart & likely is meant to also be a Bas. 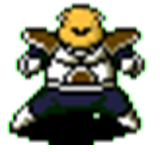 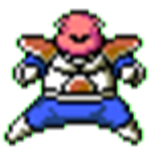 Another member of the species affiliated with the Planet Trade Organization

Retrieved from "https://aliens.fandom.com/wiki/Bas?oldid=166086"
Community content is available under CC-BY-SA unless otherwise noted.