"We are v-r-r-r-iends! Ouch!"
―The Barrel-beasts encountered by Dick Jarvis and Tweel, repeating the first words they heard from them. 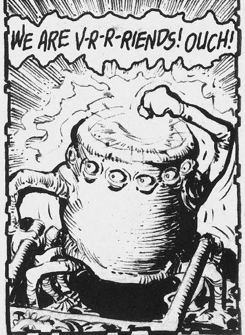 Unclear (either sapient or semi-sapient)

The "Barrel-beasts", a.k.a. the "Mound-builders", are a highly enigmatic species from the planet Mars, and identified as the builders of the strange hive-cities that look like mud heaps scattered over the Martian deserts.

As their nickname indicates, the beasts' bodies are barrel-shaped, with four short legs and four tentacle-like arms. They have no head, but a row of eyes circling their bodies. The top end of their bodies is described as "a diaphragm stretched as tight as a drumhead", and they can vibrate this membrane to imitate Human speech. However, their thinking process is different enough to render true communication impossible between Barrel-beasts and Humans, or even between Barrel-beasts and Thoths.

Like all Martian creatures (with the notable exception of the Pyramid-builder), the Barrel-beasts are carbon-based and their physiology resembles a combination of animal and vegetable. Completely asexual, they reproduce by parthenogenesis and are believed to absorb nutrients directly from the soil. It's strongly implied that they operate under a hive mind.

Due to proper communication with them being an impossibility, little is known about the culture and society of the Barrel-beasts. When outside their cities, they have been observed to run and push around carts to gather stones, sand, vegetation and other assorted things found on the Martian surface.

Their technology is considerably advanced, though. They have electricity to provide light in their labyrinthine cities, and also have machines with moving wheels which seem to serve no discernible purpose. They also have crystals with extraordinary healing properties.

Inside a domed chamber there exists a huge mechanical wheel-machine which is used to crush the contents of their carts - again, for no discernible reason as far as it's known. Strangest of all, some of the Barrel-beasts have also been observed to commit suicide by crushing themselves under the wheel while the others do nothing about it. It has been theorized that the most likely reason they crush the soil and vegetable matter is to produce a nutrient-rich substrate from which they can absorb food, much like an Earth plant. The suicides could be explained as means to add more organic matter to the mixture when it's needed, as it's also been speculated that the creatures share a hive mind of sorts and it's entirely possible that they have no concept of individuality.

The Barrel-beasts have also been observed working on the Thoth power-plants that power up the water through the Martian canals. Pierre Leroy has theorized that the relationship between the Thoths and the Barrel-beasts is a reciprocal symbiosis, with the former building up the power-plants and the latter tending to them, keeping Mars from becoming an uninhabitable dried world.

Retrieved from "https://aliens.fandom.com/wiki/Barrel-beast?oldid=181509"
Community content is available under CC-BY-SA unless otherwise noted.