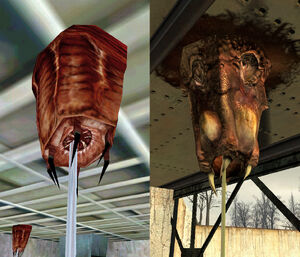 Barnacles are indigenous to Xen. They are sessile, living under overhangs, and have a long tongue that hangs several feet down. Whenever something accidentally runs into their tongue, they slowly drag them upwards to their awaiting maw, apparently wrapping their tongue around the potential victim's neck. Always the opportunist, they can't afford to be picky, and will therefore eat everything that comes in contact with them. Their mouth is very big and takes up much of their bodies.

If they happen to pick up something they don't like, such as trash someone puts on their tongue, it will still try to eat it but end up regurgitating it although this can be used as a good distraction for getting past these guys without wasting ammo.

They do seem to have a slice of intellect as after feeding it something inedible, it will not take the same item twice, thus forcing you to find a different piece of garbage to feed it to distract it.

It is unknown how barnacle move to their spots, if they move at all, but it seems that once they find a spot they like they will not move at all, simply waiting for almost indefinite amounts of time for food to come along.

Retrieved from "https://aliens.fandom.com/wiki/Barnacle_(Half-Life)?oldid=184413"
Community content is available under CC-BY-SA unless otherwise noted.