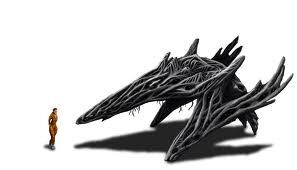 A Barkbat is a large, black predator. The tegument of the creature consists of thick vein-like structures, resembling a tree's bark, something unseen on any terrestrial animal.

The creature has seemingly no limbs other than its enormous wings.

The Barkbat lives as a large predator of the planet Trees. It cling to the trunks of skywracks, giant tree-like plants. It uses its wings to glide and hunt other creatures in the canopy.

The bark-like skin serves as camouflage when clinging to skywracks, both in dormant periods and between feedings.

Retrieved from "https://aliens.fandom.com/wiki/Barkbat?oldid=174973"
Community content is available under CC-BY-SA unless otherwise noted.