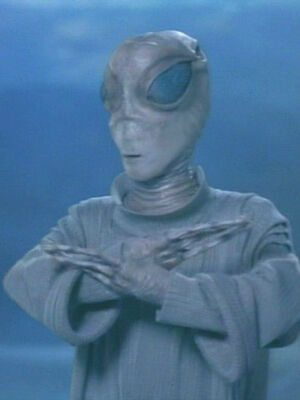 Barash is a member of a Grey-like alien species who was left as the sole inhabitant of a desolate planet after his homeworld was attacked and his species decimated by an unspecified invader.

To keep him safe and entertained, Barash was left with sophisticated technology which combines functions of holodecks and neural scanners to allow him to create anything he desired. Still, after countless years of solitude, Barash felt he needed someone real to interact with and thus faked strange signals from the planet in order to lure a passing spaceship into sending an away team to investigate. This spaceship happened to be the Federation flag ship USS Enterprise-D and Barash secretly kidnapped Commander William T. Riker and created an elaborate illusion for Riker to experience. Assuming the illusory form of a young Human, Barash pretended to be Riker's son and that the Commander was living sixteen years in the future and affected by a virus-induced amnesia.

When the scenario started to show some plot holes, Barash replaced it with an adventurous Romulan scheme, but was ultimately unable to fool Riker for long. After revealing the truth, Barash showed his real appearance and assured that his intentions were good and he thought Riker would be happy with that new life. The commander forgave him and offered to take him along in the Enterprise, thus ending Barash's exile. It is reasonable to assume that Barash was taken to live in a Federation colony or station after that.

Retrieved from "https://aliens.fandom.com/wiki/Barash?oldid=180709"
Community content is available under CC-BY-SA unless otherwise noted.