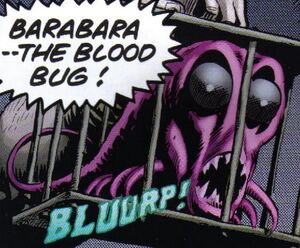 Barabara, a.k.a. Blood Bugs, are a small insectoid species of carrion-eaters from the swamps of the planet Zom. They can be raised in breeding pools.

Despite being naturally scavengers, Barabara are vicious creatures, which can attack in large numbers and have the potential to devour larger life forms alive. However, adrenaline is deadly to them, so they won't attack live victims who are in any kind of emotional state, as the bites will result in death for the Barabara rather than the victim. If, however, they come across a victim that shows no emotion, they won't refrain from devouring it.

Retrieved from "https://aliens.fandom.com/wiki/Barabara?oldid=180154"
Community content is available under CC-BY-SA unless otherwise noted.