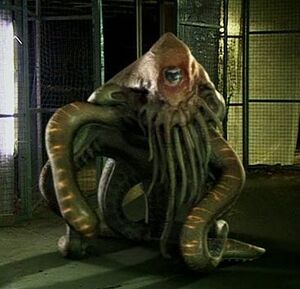 The Bane are a sapient species of vaguely cephalopodic creatures with aggressively expansionist tendencies and strong communal bonds between individuals.

Physically, the Bane are shaped like enormous mollusks with a shelled back and seven strong ambulatory tentacles. They also have a single eye on their faces and several smaller tentacles surrounding their mouths. As a telepathic species, they are able to read minds and manipulate memories. The illusory projections that make them appear like Humans, on the other hand, appear to be a technological achievement rather than a natural ability.

The Bane serve and venerate the Bane Mother, which looks like a gigantic member of the species. They refer to their kind as the "Bane family" and have very strict discipline, using cannibalism as punishment. Failing at an important task will result on the blamed individual being eaten alive by the others.

The Bane are particularly vulnerable to communication device transmissions, including those of Earth cell phones. The power generated by an Arcateenian interstellar communicator can be strong enough to kill several Bane, including the Mother Bane.

The Bane invaded the Earth during the early 21st century, disguising themselves as a human corporation to produce and commercialize Bubble Shock!, a highly addictive beverage branded as a healthy product. Advertised as "organic" and "containing bane"; this proved to be quite right when Sarah Jane Smith studied the product and discovered that it contained a chemical substance produced by the Bane Mother.

The aliens were able to take control of the minds of all those addicted to Bubble Shock!, but could not conclude the plan yet due to 2% of the Human population which was still immune to its effects.

Retrieved from "https://aliens.fandom.com/wiki/Bane?oldid=182668"
Community content is available under CC-BY-SA unless otherwise noted.