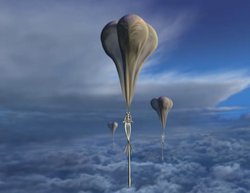 They are giant predators kept aloft by hydrogen-filled bladders. Their mouths are located at the end of a long appendage, and capture small flying worms that are then digested externally.