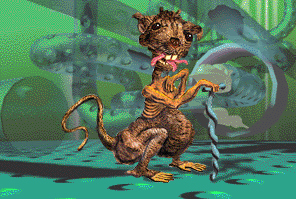 The Baliflids are cute little rodent-like organisms. They evolved on a hospitable but competitive world where they developed the ability to disarm and win over their competitors. Other creatures instinctively feel protective of Baliflids.

A Baliflid being charged by an Insatiable Strak Beast will stand, calmly staring toward the raging, thundering predator with an expression of barely suppressed mirth. Often the predator will stop short, not knowing why but feeling a sudden lack of aggression in the face of the Baliflid's harmless calm.

The Baliflids have a huge capacity for fun—they take nothing very seriously and are friendly and curious. Despite their naive and harmless image, the Baliflids are deeply intelligent and highly perceptive. They survived as a species because of their keen awareness of the outlook and motivations of other creatures.

The Baliflids of three generations gather around you, the Old Storyteller--the closest thing the Baliflids have to a leader. The cavorting and joking subsides, and the crowd waits silently for you to start.

This world is fun, but there is a whole universe to goof around in. Tell a story, to amuse your buddies, about a bunch of three-tongued rodents who build large impressive ships and fly around in space. It would be a supreme practical joke on all the big humorless self-important types out there. Be careful, though - it's always the cosmic drips that have the biggest fang-equivalents.

Super Diplomats: The Baliflids are disarming diplomats. You can force all aliens to make peace with you.

Retrieved from "https://aliens.fandom.com/wiki/Baliflid?oldid=160973"
Community content is available under CC-BY-SA unless otherwise noted.