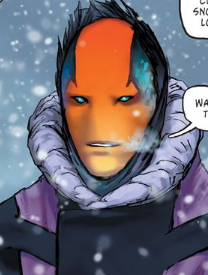 The Bal are a sapient species from the planet Balhua.

The Bal share their world with another species native to their planet, the Hua. Like the Hua, the first part of their name includes Bal to designate their species. Other races view them as profitable trade partners, as they deal in hard currency and useful materials on the Rim of the galaxy.

In the past Balhua was ruled by the Gravekings, who demanded tribute of iron, water, and gold.

Retrieved from "https://aliens.fandom.com/wiki/Bal?oldid=161215"
Community content is available under CC-BY-SA unless otherwise noted.