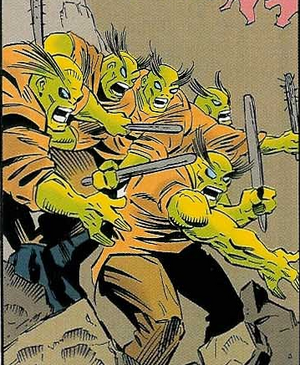 Alien Legion
The Bakelis were an alien species from the planet Bakel II in the Kalon region.

The Bakelis were the latest victims of the insidious Vreel. After the entire population of the planet was infected, the Bakelis began to dismantle their cities and technology building strange hexagon platforms under the influence of the Vreel. Nomad Force was sent to ascertain the situation, though initially they were confused by the behavior of the inhabitants. The Galactic Union ships, the Piecemaker and Revenge stood guard over the planet, but were attacked by Bakelis freighters under the control of the Vreel. Likewise the populace began to attack the ground force of Nomad. The confrontation ended with the destruction of the Revenge from a planet cannon, though the ground forces managed to hold a defensive position. The madness of the Bakelis confounded the Nomad Force, as they were still unable to locate the Vreel agitators. It was only after one of their own were infected that under a medical examination that the nature of the Vreel and the Bakelis were revealed. After evacuating the planet, Nomad recommended a quarantine of Bakel II to prevent contamination.

Retrieved from "https://aliens.fandom.com/wiki/Bakeli?oldid=159837"
Community content is available under CC-BY-SA unless otherwise noted.