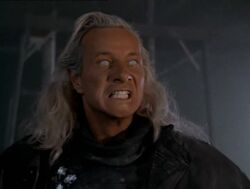 I Come in Peace
The Bad Alien (although some sources list it as "Talec") is the main antagonist of a science fiction/action movie I Come in Peace (later renamed Dark Angel). He is played by Matthias Hues.

The Bad Alien comes from an advanced species that appear humanoid and to be energy based (as they make a huge explosion when they die), they have white blood and white eyes.

He's a drug dealer being chased by a Good Alien for crimes on Earth, killing his victims with a massive injection of heroin and sucking brain endorphins. He's unfluent in English and keeps saying "I come in peace."

After killing robbers and attempted to inject the store clerk when the alien cop found him and easily defeated him "the good one". Detective Jack Caine and FBI Agent Smith found the good alien dying but not until after having them given his word to defeat the Bad Alien before other alien drug dealers come.

Caine and Smith went to his delivery spot and took his endorphin carrier. The Bad Alien discovering his carrier missing, went after them to an abandoned factory.

The Bad Alien holding Caine's girlfriend hostage, Caine smashed two vials of endorphins. With only three endorphin vials left, he threw his shotgun to the ground, the drug dealer, confused, also threw his weapon to the ground.

Caine puts the vials on a table and the alien drug dealer fired a disc but caught on a magnet, he picks up the vials, until Caine hits him from behind with a pipe. Enraged, for his vials (possibly smasehd) he attempted to inject his heroin injector on Caine but he grabbed it easily and struggled to not get injected. Caine was able to put the injector into his neck and injected with heroin. He pulled it out and tored it off from his gauntlet and Caine pushed him and had him impaled to a pipe. Groaning to death, he says his last word "I come in peace", which Caine responded by pointing his weapon at him and said "And you go in pieces, asshole." Caine fires and destroys the alien drug dealer.

The Bad Alien has a huge, mechanical, bladed whip that he uses to inject heroin into his victims. He also has a retractable blade that he uses to suck out human endorphins.

He fires a disc from his left armlet.

He also carries a large handgun that rapid-fire explosives. (In reality its a Calico M950)

Retrieved from "https://aliens.fandom.com/wiki/Bad_Alien?oldid=105352"
Community content is available under CC-BY-SA unless otherwise noted.