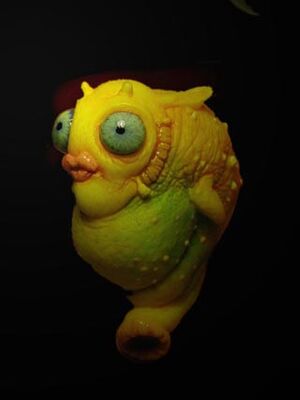 The Hitchhiker's Guide to the Galaxy Universe

"The Babel fish is small, yellow and leech-like, and probably the oddest thing in the Universe."
―The Hitchhiker's Guide to the Galaxy

The Babel Fish is one of the most peculiar, useful and controversial organisms known in the entire Universe. This small non-sapient being lives in the brain of other creatures and feeds on "brainwave energy received not from its own carrier, but from those around it". By unintentionally converting sound waves into brain waves and excreting those into the mind of its host, it actually works as a universal translator and enables its carrier to understand any spoken language, no matter how strange.

By effectively removing all barriers to communication between different races and cultures, the Babel Fish has caused more and bloodier wars than anything else in the Universe.

Retrieved from "https://aliens.fandom.com/wiki/Babel_Fish?oldid=131251"
Community content is available under CC-BY-SA unless otherwise noted.