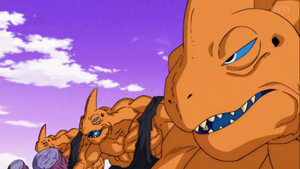 Dragon Ball
The Babarian were a race from the planet Babari in Universe 10.

The Babarians were a primitive species, around the level of the Stone Age and possessed an aggressive mentality.

The Barbarians were one of the races under the supervision of the Shinjin Gowasu. He and his disciple Zamasu studied their development, however the latter viewed them as a perfect example of how mortals were savages.

Later during the Tournament of Power all of Universe 10's combatants were eliminated resulting in Zen-Oh in erasing the Universe and all its inhabitants.

They were later restored after Android 17 wished all the defeated universes back into existence using the Super Dragon Balls.

Retrieved from "https://aliens.fandom.com/wiki/Babarian?oldid=166089"
Community content is available under CC-BY-SA unless otherwise noted.