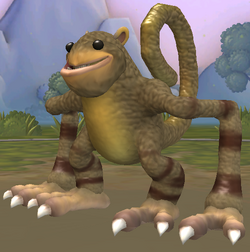 Baba Boys are a species of non-sapient organisms indigenous to an unknown homeworld, which have appeared throughout the Spore Galaxy on innumerable worlds. They are a simple creature, with no special features except for their tiny ears.

Primate-like quadrupeds, Baba Boys use both their short legs and long, gangly arms to walk about in their environs, consuming objects that adhere to their omnivorous dietary habits. Their eyes are little more than beady orbs, making it obvious that this is not their primary sense. However, they possess a pair of ursoid ears, and while small are most likely their primary source of identifying friend, foe, or food. They are only capable of a moderate bite, and can sprint for short periods, indicating that they likely feed on fruits and scavenge off dead organisms for their required consumption. The fact that they are built to move quickly for short stints also indicates a possible background in food thievery; while it could mean they simply run away from fights, they would need to be somewhat clever in order to properly make their escape before tiring out or risk their own demise.

Socially, Baba Boys will sing and dance amongst themselves, although sapient scientists observing them tend to consider both "only average".