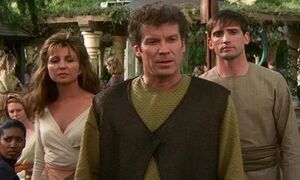 Immortal, thanks to the particles emitted by planet Ba'ku's rings

Michael Piller and Rick Berman
The Ba'ku are a sapient alien species, indistinguishable from Humans in terms of physical appearance. They inhabit the ringed planet Ba'ku, within the abnormal area of space known as the Briar Patch. Thanks the rejuvenating metaphasic radiation emitted by the rings of their planet, members of this race are essentially immortal, completely immune to ailments, and stop aging after adulthood.

The Ba'ku people are not native to the eponymous planet. Instead, they are the descendants of a warp-capable, spacefaring civilization who settled on it at some point in the mid-21st century. There, they decided to abandon most of their advanced technology in favor of a more rural and naturalistic existence. Believing in the value of diligence and menial labor, they strongly oppose the use of machinery to perform the work of men.

In spite of the immortality bestowed upon them by the planet's metaphasic radiation, and the presence of children proving that they still reproduce, the Ba'ku population as of 2375 remains extremely small, with only 600 individuals and a single settlement on the planet.

In the early 24th century, a group of renegade young Ba'ku rebelled against their agrarian way of life and reclaimed the technology of their ancestors. Exiled from the planet, they became spacefaring nomads and presented themselves as a distinct civilization known as the Son'a.

Armed with superior technology, the Son'a compensated for their small numbers by enslaving and assimilating two species: the Ellora and the Tarlac, who became their servants and made up most of their military. By producing and selling the same ketracel-white drug that the Jem'Hadar are dependent on, the Son'a became allies of the Dominion, and mastered the use of subspace-based weaponry which had been outlawed in the Second Khitomer Accord.

About five decades after leaving Ba'ku, the bodies of the Son'a started to deteriorate quickly as a result of spending too much time away from the metaphasic radiation particles emitted by the planet's ring system. Since the Briar Patch had become Federation territory by that time, the Son'a tried to strike a deal with the Federation to harness the metaphasic particles from the rings and produce a concentrated serum of youth as a cure to their condition (simply returning to the planet wouldn't be enough, due to the advanced deterioration of their tissues). This procedure would have the unfortunate side effect of making Ba'ku uninhabitable, and thus require the forceful eviction of the 600 Ba'ku citizens that were still on the planet.

Although Starfleet Admiral Dougherty agreed to this, the plan was foiled by the USS Enterprise-E crew led by Captain Jean-Luc Picard, who warned the Ba'ku about the situation and helped them evade capture. After the revelation that the Son'a and the Ba'ku are actually two different factions of the same race, and the death of the Son'a commander Ru'afo, the remaining Son'a were ultimately returned to the planet and reintegrated into Ba'ku society.

Retrieved from "https://aliens.fandom.com/wiki/Ba%27ku?oldid=198685"
Community content is available under CC-BY-SA unless otherwise noted.