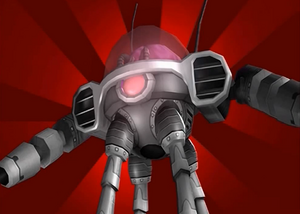 The unnamed beings were a sapient species of brain-like organisms native to rocky world of Cerebella in the Bogon Galaxy. Because of their physical design, they relied upon mechanical suits to move about their environment unabated. They are oddly capable of speaking vocally, despite no signs of having a mouth.

Retrieved from "https://aliens.fandom.com/wiki/B2_Brawler%27s_species?oldid=180620"
Community content is available under CC-BY-SA unless otherwise noted.