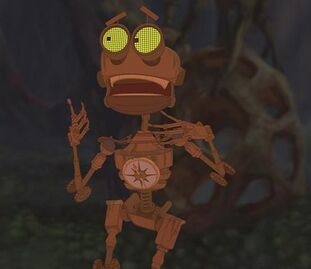 Treasure Planet
B.E.N. (Bio-Electronic Navigator) is a friendly, whimsical robot who once belonged to Captain Flint, the most feared pirate of all times.

Almost nothing is known about B.E.N.'s past, since he has lost his primary memory circuit. When B.E.N. was found, he was the sole inhabitant of the Treasure Planet, a planet later revealed to be an enormous machine that Flint used to hide his precious treasure within. After so many years alone and with a seriously damaged memory, B.E.N. has, not surprisingly, become slightly mad. When Jim Hawkins and Morph find him, B.E.N. is so delighted to have somebody to talk to, that he does anything he can to please them, including joining them in their quest to find the treasure. The three of them are able to retrieve the treasure map from the ship, which had been taken over by the pirates. However, when they come back with the map, they are captured and forced to reveal the treasure's location. Since Jim is the only one who knows how to use the map, he agrees, but forces the pirates to bring him and his friends along.

Right in the center of the planet, they find a hollow chamber containing the treasure, and Flint's remains, still holding B.E.N.'s memory circuit. The robot finally remembers that, before dying and leaving him alone in the Treasure Planet, Flint had removed B.E.N.'s memory in order to prevent him from telling anyone about Flint's trap. The trap had been set by Flint to stop anyone from stealing the treasure after his death: if somebody enters the chamber, the trap is activated and the whole planet explodes. Fortunately, Jim and the others manage to use Flint's own portal to escape from the explosion. B.E.N. now lives on planet Montressor with Jim, and works in Jim's mother's inn.