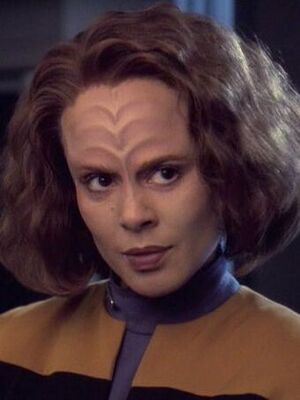 Lt. B'Elanna Torres is a Klingon-Human hybrid former member of the Maquis and chief engineer of the U.S.S. Voyager. She is also the wife of Voyager pilot Tom Paris and mother to Miral Paris.

B'Elanna was born in 23494 and was raised on the Federation Colony on the planet Kessik IV. Her parents were a human John Torres, while her mother was Miral, a Klingon woman. Most of her early life was spent on Kessik IV, due to the Klingon Empire and the Federation have a "less than cordial" attitude towards each other. Both she and her mother were the only Klingons at the colony. During this time, both weren't looked at negatively, however both felt that everyone had something negative to think about them, which was a difficult thing to shake.

The source of her insecurities and alienation from others was mostly due to the fact that she was teased by others because of her Klingon heritage. One of the schools she tended, a boy named Daniel Byrd made fun of her so bad, she actually attacked him one day at recess. B'Elanna's alienation also extended to her father, who found it hard to live with 2 Klingons in the family, comparing the anger of his daughter, to that of her mother. In 2354, John left for Earth and never returned, leaving B'Elanna in a state of grief. She believed it was because of her that he left and as a result, she became somewhat bitter towards people and very thin skinned.

Sometime after this, Miral took B'Elanna out of the school she attended and took her to the Klingon homeworld of Q'onos, where she would be taught the values of discipline and honor.

Retrieved from "https://aliens.fandom.com/wiki/B%27Elanna_Torres?oldid=178640"
Community content is available under CC-BY-SA unless otherwise noted.