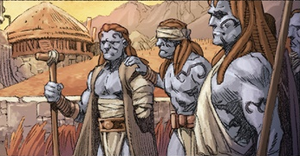 Valiant
The Azures are a humanoid species from the planet Gorin.

The Azure are humanoids, bearing close to humans, save that they possess azure blue skin and tails.

Since their enslavement by the Cadmiums, the Azure have been oppressed race. Originally a race of farmers, they took up arms to end the tyranny of their masters. They created the Azure Nation which is led by an emperor. However since their technology is somewhat less advanced than the Cadmiums and are in lack of trained soldiers, they have conscripted Burnt and Cadmium turncoats to their cause using sheer numbers and tenacity to overwhelm the Cadmiums.

The Azure were one of three sentient species native to Gorin, however they were enslaved alongside the Burnt by the Cadmium. The Cadmium Empire used the Azure in horrific genetic experiments to enhance their own species lifespans and knowledge in genetics reigning power on the planet.

Eventually the Azure Nation was formed and rose to oppose the Cadmium Empire leading to a war for control of the planet. After the defeat of the Cadiums, the Azure Emperor turned his sights towards the Burnt.

Retrieved from "https://aliens.fandom.com/wiki/Azure?oldid=175982"
Community content is available under CC-BY-SA unless otherwise noted.