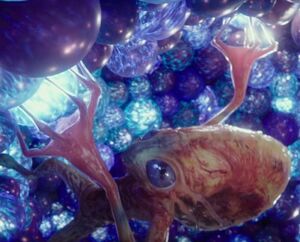 The Azin Mö are one of the 3,236 species known to inhabit the space station Alpha. They have their own habitat district in the Northern area of the station, filled with a carbonated atmosphere, and dedicate themselves to neurological, medical and biomolecular research. They can create any kind of cells.

Retrieved from "https://aliens.fandom.com/wiki/Azin_Mo?oldid=161136"
Community content is available under CC-BY-SA unless otherwise noted.