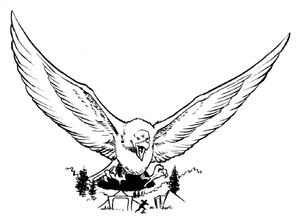 Avrils, a large bird of prey-equivalent indigenous to the moon Yavin VIII, was a beady-eyed species covered in thick black feathers. They had a very impressive wingspan of 8 meters, and sharp, 20cm long talons. Presumably due to their size alone, they were capable of releasing an ear-shattering cry.

Apex predators, avrils would prey upon several other species including the local raiths, reels, and purellas, though their favorite were the children of the sentient Melodies.

Retrieved from "https://aliens.fandom.com/wiki/Avril?oldid=178061"
Community content is available under CC-BY-SA unless otherwise noted.