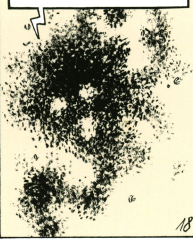 Avoghai is the Overseer of Reincarnations and Two-Faced God in the Darshanide pantheon. He is the ferryman of souls and holder of mystical secrets. Executor of eternal annihilation..etc

Avoghai takes the form of a mass swarm of insects. However its later revealed that he also has a humanoid form, with two faces, one either side of his head, representing the living and the dead.

While Avoghai is recognized as a main deity, though throughout Darshan each valley has its own funeral rites in accordance with local peculiarities. Avoghai rules over death ad life that results from it. Its advisable not to offend his complex personality. He's parsimonious and hates waste. When called upon at a funeral, he devours the body.

Retrieved from "https://aliens.fandom.com/wiki/Avoghai?oldid=163683"
Community content is available under CC-BY-SA unless otherwise noted.