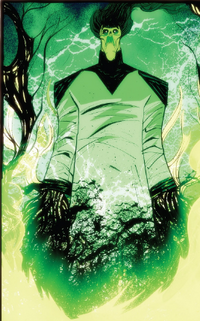 Avin or the Faded Man is an ancient alien entity who seeded all life in the World Reader Universe. For all intents and purposes he is God.

Eons ago Avin hailed from a world that was the last world where life still existed. However his world would eventually die. Avin's species possessed the power of Life, but chose not to use it to save themselves. Avin determined to see something new and bring change, took the power and left his dying world.

Avin found other worlds and wishing to create something new and long lasting, used his newfound abilities and seeded life. His work took millions of years to which he watched his children grow, becoming great and powerful civilizations. Sadly the worlds that he touched did not last and would always destroy themselves. Avin attempted to directly intervene to guide his children, teaching them. Avin's very appearance inspired religious worship, and after he departed, the worlds would take his teachings to violence leading to self-immolation.

Avin heartbroken that his efforts to create lief only met with inevitable failure, realized his work was broken, that life was broken. The god resigned himself to burying his children, shepherding the souls of civilizations that had died so that their souls would be at peace. However many of the souls he tried to help, refused to leave, and believed Avin to be a demon that fed on souls and was responsible for their world's death.

The psychic Sarah, part of an Earth exploration mission, found traces of his involvement and spoke to the surviving ghosts and believed him to be a monster. Sarah disobeying orders followed the traces of Avin, interviewing wandering spirits. During her search she discovered that the exploration mission she was on was a ruse. Probes had been sent centuries ago from Earth possessed sensor weapons to ascertain a planet's viability and a native's species threat assessment.

Many of the worlds Sarah had been were in fact murdered by her own species to make room for humanity.

Sarah's team were mercilessly slaughtered by some surviving aliens that had survived the bombardment of their planet. Sarah survived and met Avin again, in the Ether, who explained his purpose and intentions. He told her he had give up on Life, stating it was pointless that it would always end in failure. He told her Earth was the last planet to sustain life and it wouldn't be long until her race would join the dead.

Sarah appealed to him that though life was brief, his work was good that his creations kept striving to be better. Nothing was perfect, not even him. Avin inspired by her words, imparted life into a world, resuming his work.

Avin was a powerful individual that possesses a symbol that allowed him to impart life on worlds. He was capable of traveling to other worlds under his own power and appear in the ether, the spiritual realm. In addition he acted as a doorway to the afterlife where souls of the deceased resided.

Retrieved from "https://aliens.fandom.com/wiki/Avin?oldid=137306"
Community content is available under CC-BY-SA unless otherwise noted.