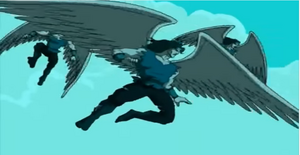 The Avians are an offshoot of humanity that possess wings.

The Avians are descendants of a race of slaves mutated by the Y'Lyntians to suit their needs. They possess whit wings like angels and are capable of flight. In addition they also possess talons for feet.

When the Y'Lyntius was the apex civilization and held dominon over the Earth, the Y'Lyntians enslaved various tribes of humans.

Those who were not suited for certain tasks were mutated by the power of the Sun Crystal. The Avians were among those and mutated to have wings. They were used to lift heavy loads and to keep dissident Y'Lyntians from escaping.

The Avians were kept in a floating cage so that they would not foul up the purity of Y'Lyntian air. When the other humans cultures rebelled, resulting in the destruction of the Sun Crystal, and collapse of the Y'Lyntian Empire, the Avians freed their cage from its surface anchor allowing it to rise into the sky. Several Avians managed to retrieve a few fragments of the Sun Crystal. These crystals would later be collected to form their own Energy Core enabling their city to stay in the air and turning their prison into a home.

But after centuries of isolation, many Avians believed they should conquer the surface, not hide from it. Mephos, one of the radical of Avians, led an uprising that sparked a civil war between Avians. His uprising was defeated and he was eventually, banished to the surface, stripped of his wings. Raptarr, a former friend, kept an eye on him to make sure that he would do no damage and eventually became known as the Guardian Angel.

Mephos tried several attempts to return to the Avian city each thwarted by Raptarr. Eventually he managed to construct himself a pair of mechanical wings and stole Raptarr's crystal diadem, which would allow him to locate the Avian city. Mephos joined up with his remaining followers, who had captured the Council Chamber. He intended to use the power of the city's crystal as a devastating weapon to conquer the surface, but Raptarr and the Turtles defeated him and he was once again stripped of his wings, but this time imprisoned in the city.

The Avians are an isolationist people and a former slave race. Mainstream Avians are an honor people, believing if a debt is owed it must be repaid. Avians have a innate sense with Y'Lyntian technology. They possess crystal diadem, that allow they to locate their homeland.

Retrieved from "https://aliens.fandom.com/wiki/Avian?oldid=181708"
Community content is available under CC-BY-SA unless otherwise noted.