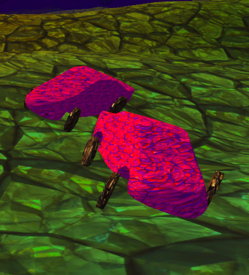 Juice Galaxy
The Automobiles, named after their resemblance to the vehicles from Earth, is a strange creature found amongst the Planetoids. In scientific terms, the Automobiles are classified as extinct, yet there has been reports of Automobile sightings in recent years which put this placement into question.

Automobiles are essentially living vehicles in summary of their anatomy: they're made up of a single robust body, with two sets of wheel-like limbs used for fast-paced locomotion. The structure of the creature, both in terms of a vehicle and a living organism, lacks any visible sensory organs or facial features. Its skin is vibrant red in color, with patterns of reddish-purple running along its entire body. Although having no apparent vocal organs, they are capable of emitting a motor-like sound when in motion.

The dietary habits of these creatures are entirely unknown, as they don't possess any known means of consumption. Their main behavior though is their tendency to ram into any other organism within range at high speed, similar to a speeding car.