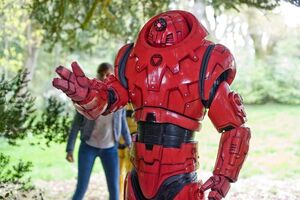 Unknown (Though they are easily capable of learning others.)

Doctor Who
Automatons are robots used by the inhabitants of a monarchical planet in the 21st century.

They have scanners and laser weapons in the first fingers of their right hands. They spoke a robotic language but could easily pick up the languages of others.

In 2010, two Automatons, one red and one yellow, were used to find the heir to an alien throne, who was hidden on Earth.

They removed the whole population safely except Clyde Langer and Rani Chandra, moving the population to a sub-dimension. They chased Clyde and Rani before forming an alliance with them and followed Clyde and Rani to a nature reserve where they found Gavin. The Bio damper protecting Gavin was removed and he was shown the planet he would rule. He left with the robots and the population were returned.

Retrieved from "https://aliens.fandom.com/wiki/Automaton_(The_Empty_Planet)?oldid=180151"
Community content is available under CC-BY-SA unless otherwise noted.