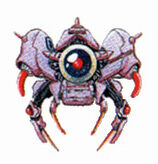 The Autoad is a jumping robot found on SR388, built by an ancient civilization (likely the Chozo, as they were previously the dominant species of SR388). Their name and method of attack suggests they are mechanical versions of the Hornoad.

"Another type of robot, presumably left after the demise of the ancient civilization. They now hop around out of control."

Retrieved from "https://aliens.fandom.com/wiki/Autoad?oldid=180463"
Community content is available under CC-BY-SA unless otherwise noted.